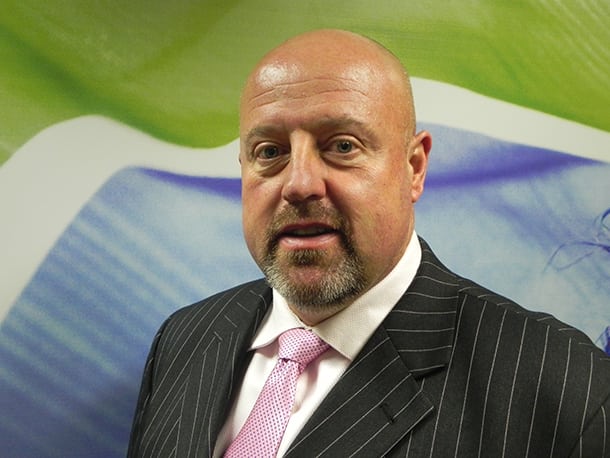 It’s been a busy few months for Dave Jenkins, the new Managing Director of leading South African reseller Waltons. Jenkins’ appointment in February 2012 marked the end of an era for the company with the departure of long-serving Managing Director John Farrell and a number of other senior managers, and a head-office move from Cape Town to Johannesburg.

Jenkins said the move made sense as most of Waltons’ major clients are based in the city, as are parent group Bidvest and sister companies such as Kolok and Silveray. While there has been a management reshuffle, Jenkins’ new executive team members are by no means newcomers to Waltons. In fact, the current Finance Director made the move up from Cape Town, while the new group heads of sales and marketing, human resources, furniture and procurement all joined from a Waltons division.

Along with the head-office move, there has been a rationalisation of Waltons’ operating divisions from five to three. Jenkins admitted to being “puzzled” by the previous set-up which saw the five operating divisions basically acting as autonomous businesses trading under the Waltons name. This led to a major duplication of costs and a failure to achieve economies of scale and the sharing of best practices. The Eastern Cape and Free State operations have since been dismantled and incorporated into the existing operations, and Jenkins says Waltons is now run as a national organisation with the three divisions – Cape (based in Cape Town), KZN (Durban) and Inland (Johannesburg) – now following a single, national strategy.

The company has also pulled out of the promotional gifts and copy click categories.

While these actions have led to major one-off and restructuring charges, Jenkins said that underlying operating profit for the 12 months to 30 June showed strong double-digit growth despite sales being relatively flat at just under SAR2 billion ($237 million).

It’s not all about making cuts, however.

Jenkins said that the retail strategy is to open more outlets, but to do so with a more “scientific” approach that takes into account the location of a store from both a B2B and customer footfall potential. He is also looking at strengthening categories such as copy and print in order to drive more traffic to stores.

A new distribution centre was opened in Durban last year and this financial year will see similar facilities come online in Cape Town and Johannesburg. The other major area of investment this year is in technology, with a revamp of the company’s IT platform under Microsoft Dynamics 2012. Once this move to a new IT platform has been completed, that will pave the way for an improved e-commerce offering, another thing high on Jenkins’ to-do list.

With a strong background in marketing, it is not surprising that this is another important area for the Waltons Managing Director. A rebranding initiative was launched in July, introducing the tagline ‘Waltons Breeding Success’ and a new set of company values and expected behaviours. The aim is to transform Waltons – internally – into a purpose-based organisation. Externally, the message is that, whether it is for companies, schools or households, Waltons provides the tools that lead to success.

When asked about the strategic partnership with Lyreco, Jenkins said he believed there was more scope for Waltons to benefit from this relationship and that one of his strategic objectives is to work more closely with the global reseller on areas such as marketing intelligence and their international client base.

In terms of the current business climate in South Africa, Jenkins admitted that things were tough and very much price driven in certain key categories such as copy paper. One area that the company is looking to grow is its key corporate accounts channel. Waltons currently services 69 of the top 100 companies in South Africa and is going to be making a push with the remaining 31, as well as looking at increasing the share of wallet with existing customers.