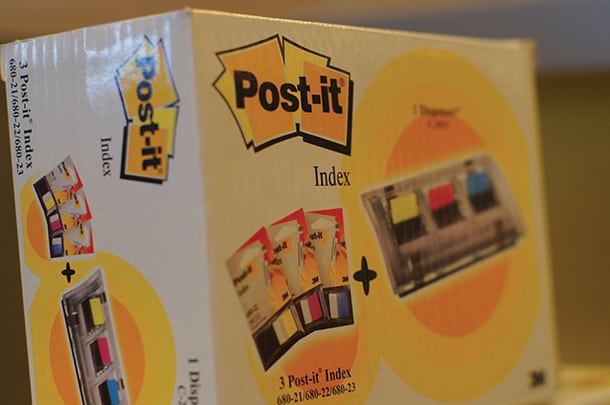 The US Department of Justice (DoJ) dropped a bombshell when it said in September it would file a civil antitrust lawsuit if 3M went ahead with its plans to acquire Avery’s Office and Consumer Products (OCP) Group.

The DoJ said the proposed acquisition would have substantially lessened competition in the sale of labels and sticky notes, resulting in higher prices and reduced innovation for products that millions of US consumers use every day. It said 3M would enjoy a dominant 80% market share should it acquire OCP under the proposed terms.

The $550 million 3M/OCP deal was announced at the end of December 2011 and was expected to attract the attention of antitrust authorities in the US, hence the estimated closing date of sometime in the second half of this year. Compare that to the ACCO/Mead deal which was announced at roughly the same time, but closed in just a few months.

The proposed agreement included the Avery consumer labels business and brand, and other filing and organisational products, but specifically excluded Avery’s sticky notes business and products such as its label pads and note tabs.

Ironically, one of the reasons the DoJ gave for vetoing the deal was the increased competition between 3M and Avery following 3M’s entry into the labels category in 2009. It won the Office Depot account and also made a significant acquisition in Asia when it purchased Japan’s A-One in 2010. With printable media representing around two-thirds of OCP’s sales, these moves by 3M forced Avery to adopt a ‘spend and defend’ strategy. This led to lower wholesale prices and increased innovation from Avery in the category, said the DoJ, and also coincided with Avery’s entry into the 3M-dominated sticky notes category where it launched new products which were aggressively marketed.

“As a result of the competition between 3M and Avery for the sale of office products, customers have saved millions of dollars and benefited from innovative labels and sticky notes products,” said the DoJ in a press release.

The DoJ’s release also said that 3M had “abandoned” its plans to acquire OCP, but this was quickly denied in a joint 3M/Avery statement which read: “3M and Avery Dennison have not terminated the purchase agreement governing the transaction. In light of concerns about the transaction raised by the DoJ, the companies have voluntarily withdrawn the notification and report forms filed under the Hart-Scott-Rodino Act.

“The companies continue to believe the transaction would benefit customers and consumers. 3M and Avery Dennison are committed to working together to explore options to address the DoJ’s concerns, obtain regulatory approval and complete a transaction.”

Quite how 3M could revive the deal in a way which suits its ambitions is unclear. As it stood, it would have achieved a dominant position in the labels category and taken out an aggressive new competitor. Any compromise may nullify these benefits. Therefore, the best-case scenario for 3M would be to convince its major customers that the deal makes sense as it stands and hope that would satisfy the DoJ. It is by no means certain it will be able to achieve this.

Another option could be some form of licensing arrangement for a third party to use Avery’s label technology, either as an alternative brand or for private label ranges.

Sticky notes is different because Avery was essentially making the products via third-party manufacturers anyway. The only assets it has here – excluding its brand name, customer relationships and distribution footprint – are a number of patents for its label pads and note tabs which it has been looking to sell off since the beginning of the year.

The success that Avery has had in sticky notes shows the potential of the category, particularly in added-value items. It would not be a surprise to see one of the other leading OP brands such as Esselte or ACCO enter this category in partnership with Avery’s manufacturing partners, with or without acquiring the Avery patents. As long as there is an established distribution network in the US, that may well be enough to satisfy the DoJ.

A joker in the pack could be Esselte. It was rumoured to be interested in acquiring Avery before 3M jumped in. Avery clearly wants to offload the OCP division and the DoJ’s decision may now revive Esselte’s hopes of doing a deal, as well as convince Avery’s shareholders that if they want a quick, clean transaction, they are now going to have to consider an alternative to 3M.