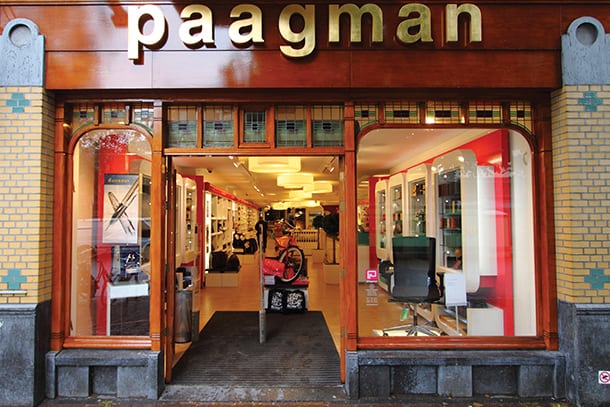 Times are hard and retail has been suffering particularly badly, so it’s refreshing to visit a store that’s full of vibrancy, interesting products and – perhaps most importantly – full of customers.

It’s the Paagman-style retail experience. Unassuming from the outside, Paagman is a third generation family business located in a mid-sized shopping street in the Dutch coastal town of The Hague. Behind the façade, however, lies a large store of about 25,000 sq ft (2,500 sq m). It’s divided into several different segments – office supplies, books, music/entertainment, a post office and a café.

It’s a tad removed from your typical OP retail store experience. The clever thing Paagman has done is attract people to the store and generate foot traffic, something so many retailers are struggling with.

Company Owner and General Manager Fabian Paagman says: “We organise about 200 activities and events every year. They all take place at the café right at the back of the store, so there’s a big incentive for the public to go and have a look at all the store segments. In our events we try to cover all product categories. For example, we do book signings, have live music performances and earlier this year we had the launch of a new Parker Pen.”

At a time when customers are increasingly moving from physical store purchases to online sales, it’s hugely important to offer a difference – both in product terms and in the general retail experience.

Paagman says: “For office supplies specifically, we’ve transformed and expanded our product offering. Of course we have the basics like Post-its, cartridges and paper, but we now also offer products that people may not typically expect in an OP environment – umbrellas as just one example. We’re also the largest reseller of Moleskine products in the Netherlands. We basically laid out a whole part of the store in the style and the atmosphere of Moleskine.”

All this helps to give the store an atmosphere and a dynamic that many retail outlets lack. That’s not to say it’s all rosy. Times are tough with revenues static and profits low. The company generates annual revenues of about €11 million ($14.3 million) and expects net profit to be in the region of €200,000-€250,000. Office products in that mix are doing well, accounting for about 35% of revenues but 50% of profit.

This sounds gloomy, but Paagman is pleased to be making a profit at all this year. He says: “Our profit is going to be at an all-time low unfortunately, but we’ve been investing a lot of money recently. Also, we had projected sales to be a little higher but it hasn’t happened, so in that respect 2012 has been a bit disappointing.”

He adds: “Business is very difficult, margins are under pressure and it’s hard to make good money. If even a big player like Staples cannot keep its head above water in neighbouring Belgium where it’s closed all its stores, who knows what it’s going to do in the Netherlands. It’s a worrying time for businesses overall.”

Paagman is a great believer in continuous investment and in fact blames the lack thereof on the troubles that some of its competitors are facing. He says: “In difficult times, like the last few years, many companies have suddenly said ‘okay, it’s tough now, so we have to invest and innovate’. I believe part of the strength of our company is that we always invest and innovate, in good and bad times. Those companies that have not bothered when business was easy and revenues nice now realise that they’re so far behind that the leap to catch up is just too big.”

Like its competitors, Paagman has rigorously cut the fat in its operation, closing down a number of other retail outlets, dropping certain product categories and closing down its logistics centre.

From a retail perspective, it’s just the one flagship store in The Hague now, with no plans to expand any further from a footprint point of view. But while the company’s roots are in retail – Fabian Paagman’s grandfather Gerard Paagman Sr opened the first bookstore in The Hague in 1951 – it’s the business’s focused office supplies B2B presence, launched by Fabian’s father Gerard Jr in 1977, that now has the most potential for growth, along with Paagman’s online presence.

Having bought two independent dealers in 2011, B2B now accounts for 40% of overall revenues although Paagman admits that this is often a bit of a grey area, especially since the two firms merged in the mid-1990s and are officially one entity. The core customer base in B2B comprises local and regional small to medium-sized businesses and organisations, with just a smattering of large contract-style clients.

In addition to growth through acquisition, better customer recruitment has also been important, especially in a flat market with little prospects of growth. Paagman says: “We were quite late with our website development and only properly launched our shop in 2009, but once it was up and running, we made good progress in terms of new customer acquisition. There’s also been a lot of expansion of business in The Hague over the past few years and that’s been very good for us.”

Curiously, many of its B2B customers are not even aware that the company has a retail presence, while others use both ‘facilities’. This means prices have to be extremely transparent to all but contract-bound customers.

Paagman is also acutely aware of the need to not segment customer groups too much. He says: “We try not to label our customers as a B2B or B2C customer. Many of our customers buy from us in different guises. Somebody might visit us during a weekend with the whole family, have a cup of coffee in our café and browse through the books. But this could also be the owner of a company that during weekdays is a B2B customer.

“Our employees know that even though they’re only selling a newspaper or serving a coffee on a Saturday morning, the person they’re selling it to could be a potential or actual B2B client with big annual sales.”

As a result, Paagman is a company that is equally at home in the B2B and B2C space. At the core of the business is a customer-centric can-do attitude. With the help of OP wholesale partner Quantore, drop-ships to B2B customers have become very much the norm, for example, but for those in need of a more personalised service such as desktop delivery, for example, Paagman has its own vehicle and driver to do the job.

The retail store, meanwhile, is open 80 hours a week (9am-9pm on a weekday), an unusual move for a business of that type and typically only seen in large grocery stores. Even more unusual is the fact that Paagman has been doing this for about 15 years.

You might not buy your office products at 8pm on a Friday night, but you may drop in for a cup of coffee or a snack, listen to some live music, or browse through some books – and pick up some half-forgotten office supplies in the process!