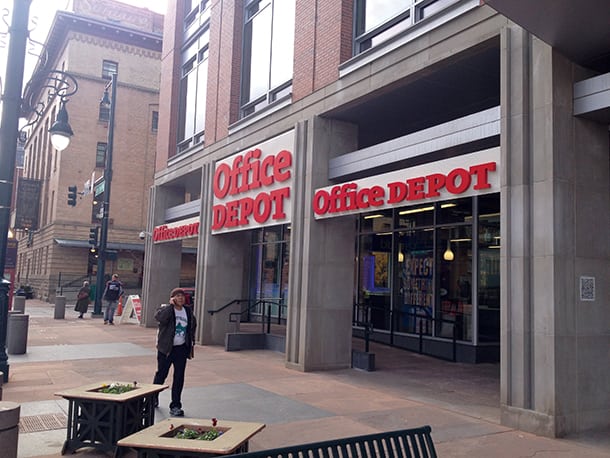 As expected, it was another challenging set of quarterly results that the three global power players – Staples, Office Depot and OfficeMax – reported in November. Log onto opi.net for fuller coverage of the actual numbers, but the general sales trends were pretty much the same as those we have been seeing all year: relatively stable delivery results in North America, single-digit decreases in North American retail and alarming declines in international markets with the exception of Depot and ‘Max’s operations in Mexico.

The upshot is that the overall top line is continuing to shrink, margins are being squeezed due to competitive pressures and important categories such as traditional paper-based products and ink and toner are – most people would agree – in secular decline. Add to that the rapid move to online and mobile shopping, the looming shadow of Amazon, the Eurozone crisis and the possibility of the fiscal cliff in the US in January, and you can see why the office supplies sector isn’t exactly the darling of Wall Street at the moment.

But we are in an industry which has seen – and coped with – change before, albeit perhaps at not such a fast pace as we are witnessing today. As someone pointed out at the recent OPI European Forum in London, no-one really knows what the future will hold, but what we do know is that if we just sit still and do nothing, then we don’t have a chance of surviving.

Big-box bashing seems to have become something of a habit recently, but to underestimate these multibillion dollar companies would be churlish. They’re not exactly going to lie down and wait to get flattened by the Amazon steamroller, although some would argue that this will be the final outcome regardless of their moves. Here is a closer look at two major initiatives that were revealed during the latest round of earnings conference calls.

‘Every product your business needs to succeed’

Staples has a reputation for taking the lead when it comes to expanding into new product categories and services, and nothing coming out of Framingham recently suggests that this is about to change. Expanding the product assortment and accelerating the growth of product-related services are two of the key priorities in Staples’ growth plan. Facilities and breakroom is a prime example of where Staples moved first and this has developed into a billion dollar business in North America. Ron Sargent described facilities as a “home run” during the most recent quarterly conference call, and Staples is starting to load the bases in other categories as it aims to develop into a true single-source supplier for business customers.

According to Staples, nearly 75% of its customers have said they would consider buying additional products from the company if it offered a broader assortment. When you have more than ten million customers, then that represents a lot of potential. Sargent didn’t want to give too much away to analysts, joking that if he did then he’d be revealing competitors’ strategies six months down the line, but said that Staples had identified five verticals that it would go after. Safety products is undoubtedly a priority category. The product assortment has been greatly expanded and Staples recently teamed up with the National Safety Council in the US to promote its offering. In the form of the appropriately named Bob Risk, Staples also has its very own Senior Strategic Safety, Health and Wellness Manager.

Industrial supplies, an expanded furniture assortment, packaging and mailroom would all appear to be other areas that Staples will focus on.

A couple of interesting news items have also come out of Staples’ International operations recently that could signal moves into other non-traditional areas.

There’s nothing new about the expansion of copy and print services, but the announcement that Staples Europe had struck a deal to offer 3D printing to customers was an unexpected one. The company is launching Staples Easy 3D in partnership with 3D printing firm Mcor.

Mcor’s technology uses paper to produce 3D models that Staples thinks will appeal to professionals such as architects, surgeons and engineers in what it describes as a “more affordable and more accessible” solution. Customers upload electronic files and then pick up the models at their nearest Staples store or have them shipped to their address. The online platform for Staples Easy 3D will initially be made available in the Netherlands and Belgium in Q1 2013 and, if successful, will be rolled out quickly to other countries.

News is also coming out of Australia of a major print management contract win for Staples with drinks giant Schweppes. This three-year multimillion-dollar contract reportedly encompasses print management, point of sale materials, asset management, warehousing and web-to-print, and Staples was chosen for its ability to provide a single-source solution. This is certainly an indication that Staples has the capabilities to play in the highly competitive print management space.

The key is how quickly Staples – and the other big boxes – can ramp up profitable sales in these new areas. As we have seen, even adding a billion in the facilities category hasn’t been enough to offset declines elsewhere.

Office Depot provided details of its retail portfolio strategy in the US at the beginning of November. The company has committed to spending $60 million a year over the next five years to downsize or relocate around 500 stores – 45% of its current store network – into a small or mid-sized format. During the same timeframe, Depot will also close up to 100 stores as leases expire. In 2013 at least, the majority of the 100 downsized or relocated stores will be remodelled into 5,000-7,000 sq ft (500-700 sq m) format outlets, a far cry from the 25,000 sq ft ‘sheds’ that typified the heyday of big-box expansion in the 1990s.

Depot has been promoting the new, smaller format stores as they have been opening, even producing a video about the concept which can be seen on its corporate website. A main goal of the new stores is to encourage customers to interact more with the products and store staff.

There is a clear focus on technology products. The shop features a store-within-a-store from tech and mobile accessories retailer bluwire – best known for its outlets in US airports – and there are product islands for a variety of PC, tablet and printer products.

Depot’s Print Shop occupies a key place at the centre of the store as the office supplier looks to develop this higher margin service offering. A Tech Shop provides services such as computer repair, network set-up, software installation and virus removal.

There is also a ‘PC Bar’ where people can work, taking advantage of free wi-fi, a recharge station and free coffee at certain times of the day. Cynics would say that this just gives customers a comfortable place to browse online before purchasing their tech products cheaper on Amazon!

Touch screen displays at the ends of aisles allow customers to browse for products online and purchase them from officedepot.com if they are not available in the store.

This is a key concept of the multichannel strategy of all three big boxes: carrying a broader assortment of products online that customers can pick up later or have delivered. Obviously, the smaller stores cannot carry the broad range of inventory available on the web.

In fact, Depot’s new store format is not a million miles away from the Business Centres that OfficeMax’s Canadian subsidiary Grand & Toy transitioned to a couple of years ago, and there are certainly question marks over how successful that move has been.

Despite the store transformations, the office suppliers are still in something of a quandary when it comes to retail. They want to reduce exposure to low-margin tech categories, yet are upping the proportion of tech products on their shelves and are among the first to advertise great deals at times such as Black Friday.

However, in most markets they are still locked out of the tech brand which causes the greatest excitement amongst consumers: Apple.

Where Apple products are stocked – by Depot in France for example – tests have clearly shown that there is an improvement in store traffic. Elsewhere – at least for the time being – Depot will just have to hope that customers are tempted to abandon Starbucks for free coffee at one of its new-look stores.