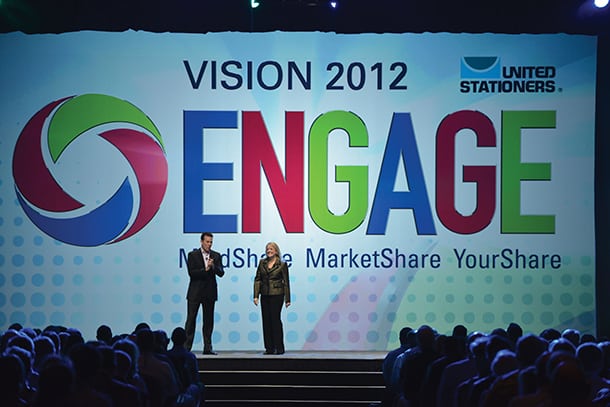 In a period of economic uncertainty and extremely tight budgets, it’s not easy to plan such a large-scale event as Vision, United Stationers’ conference that’s held every 18 months. However, it can be done, as the wholesaler demonstrated.

With margins being squeezed from both the top and bottom of the supply chain, United took the decision not to pour as much money into the event as previously – last year rock band Journey performed at the closing party. While the opening night party did seem to lack a certain something, it’s fair to say that the event’s strong focus on building a business for the future by ‘engaging’ with the tools available meant that dealers would have felt it was worth the effort to attend. Some serious messages from United’s executive team and an interesting seminar line-up, coupled with an excellent closing party, probably did a better job of engaging dealers than competing with Las Vegas’s party scene would have done.

Watch a video report from Vision, and interviews with United’s key executives

Todd Shelton, President of United Stationers Supply, opened the first general session after video DJ 2nd Nature made sure that even those sitting in the back were wide-awake. Shelton introduced the conference as a time for independent dealers to embrace change and invest in moving their businesses forward.

All United’s executive speakers were refreshingly open about how the wholesaler views the next few years, both for itself and for its customer base. CEO Cody Phipps spoke to the audience about the wholesaler’s overall corporate strategy. For the record, as he put it, he emphasised United’s focus on office products as its core business, and its dedication to independent dealers, which represent 84% of United’s customer base.

He outlined what United views as the key challenges of the next few years: digital office growth offsetting office products growth as the economy recovers; commoditisation and the move of products to online; manufacturer and reseller consolidation; Amazon; and the rise of the empowered user. However, Phipps stressed his belief that with the “army of entrepreneurs” before him, the industry can adapt.

Phipps expressed United’s desire for dealers to get into other products and services, and how the wholesaler’s aim to become a leading distributor of not just office products can help them to do that. He referred to the acquisition of OKI Supplies and the continued strategy for similar moves in the future.

Following Phipps, Shelton and United’s Head of Research Carol O’Hern revealed some interesting findings. For example, 77% of office end-users purchase some products on behalf of their organisation compared to 61% last year, highlighting the rise of the empowered user. 64% of office products are now bought online, which jumps to 72% with younger workers, and 22% of consumers have bought office products on their smartphone in the last 90 days.

Highlighting some good news for independents, 38% of consumers can name a local dealer compared to 32% last year – although Shelton pointed out that this still leaves 62% who can’t, creating an opportunity for independents to do some work here.

The last of United’s executives to take the stage was new team member Harry Dochelli, who is now responsible for leading United’s dealer channel.

Having come from a big box background, he spoke about the insights he can bring to dealers, and the advantages that dealers have over power channel competitors.

Dochelli talked about other giant competitors such as Grainger and Amazon, but expressed his belief that “disruption brings opportunity”. He said: “If you’re nimble you can gain market share in a disrupted market.”

Overall, it was a very convincing opening session with some rallying messages against some tough challenges. Following the talks from the United team, four keynote speakers were enthusiastic and engaged the audience further.

Dealer seminars took up most of the day, and these were well attended by dealers. Topics such as how to engage multiple generations, social media, public sector contracts and how to get the most out of jan/san seemed to really hit the spot, and many reported they had taken away useful information.

Day two started with another rallying general session. Dochelli spoke for the first part and reemphasised the messages that United was aiming to get across, namely that dealers need to focus on seven things:

Megan Ogden and Mark Evans, United’s branding team, gave a high-energy presentation after Dochelli. They highlighted how important marketing and branding are to achieving these goals, and how the one-size-fits-all approach to business is “officially dead”. The line between B2B and B2C is blurring, said Evans, and there will be no distinction between them in a very short time.

United certainly worked hard to get the messages above to sink in over the two days, and they were revisited many times. The presentations and seminars did stay on the right side of repetitive, however, as the wholesaler is clearly passionate about helping dealers to understand the importance of the internet, branding and the modern customer.

Though some were tempted away from the afternoon’s expo by the delights of Las Vegas, the trade show floor was well attended. However, the final party is what most people will describe as outstanding. The Tao Nightclub really was full of life for the closing HP party, and dealers and vendors were certainly enjoying themselves. Judging by immediate feedback, United Stationers should be satisfied that it achieved its goal for Vision – to get people engaged.