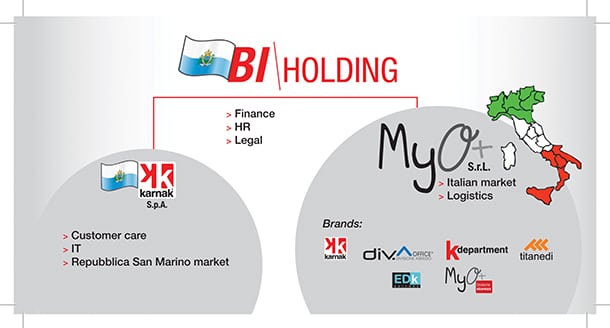 Italian contract stationer and mail order firm Karnak is in the final stages of an organisational overhaul that it hopes will clarify its market position and bring operational efficiencies.

The location of Karnak’s headquarters in the ‘tax haven’ of San Marino has long been viewed with suspicion by rivals. This has been compounded by tensions between the Italian and San Marino governments, with the republic still on an official Italian tax haven black list.

Karnak itself has come under the Italian fiscal authorities’ spotlight. An investigation into the tax status of Karnak’s independent sales agents in Italy is still ongoing and, in a separate and unrelated development earlier this year, Marco Bianchini, Chairman of the BI/Holding group that owns Karnak, was arrested and imprisoned on charges of corruption. He has since been released, but is still under investigation. However, he has relinquished control of the family-owned business founded in 1960, and the group turned to British businessman John Hughes to take on the Chairman’s role. That, in itself, represented a significant cultural and strategic evolution for the company, but sent a clear signal that it was ready to break with certain traditions.

Speaking to OPI at the recent Big Buyer trade show in Bologna, Supply Chain Manager Lorenzo Rudella provided an update on developments at the company since Hughes took the helm in February.

Rudella stressed that Karnak had been looking to make changes before Hughes joined, mainly due to the ramifications of San Marino’s presence on the Italian black list and a need for simplification. Hughes’ arrival, nevertheless, has certainly accelerated the process of change.

From nine to three

The major development has been a reorganisation and simplification of the BI/Holding group structure from nine separate companies to three. The holding company is still based in San Marino, but operations have been split in two, with separate entities for the Italian and San Marino markets.

The new Italian subsidiary – based near Rimini where the company already had offices and a distribution facility – brings together sales units into a single company known as MYO (derived from ‘My Office’). This includes the former OP reselling companies of Karnak, Titanedi and Yes Office, the EDK publishing arm and the K&K logistics business. The MYO name has been in the marketplace since November and is featured on all 2013 catalogues.

Rudella said that the integration process began in June and is on target to be completed by the end of the year. Challenges include the move to a single IT platform, merging customer databases and setting up new accounts with around 160 suppliers – purchasing is now done directly between MYO and its suppliers.

The merging of the former business units has led to a number of redundancies in overlapping functions, Rudella noted, and MYO now has a staff of just over 200, excluding the network of sales independent reps.

With its strong customer base in the public sector, MYO is certainly feeling the spending squeeze, and Rudella admitted that sales would be down in the double digits this year, although he argued that this was in line with market conditions. The company’s sales are still in excess of €100 million ($129 million) and profitability has been held steady.

Rudella did highlight a number of bright spots. As part of the Interaction group, MYO has access to the Q-Connect brand, and Rudella said that this had been one of the few areas of growth with 2012 sales of the brand set to be around €11 million ($14.2 million).

The company is also seeing success in areas that are partly offsetting declines in traditional categories. For example, an e-learning business training offering has seen a number of large contract wins, sales of safety products have risen to €1.5 million and logistics services is a growing area.

The company has also revamped its office interiors and furniture brand, Diva, offering 24-hour delivery to most parts of Italy.

While 2013 looks like being another challenging year for the Italian office products sector, Rudella says that MYO is on a stronger footing and that its “house is now in order”

“When you cross a river, your feet get wet,” he commented, “but at least we have got to the other side.”