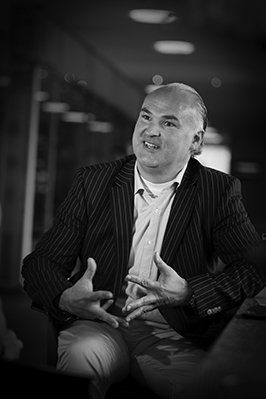 2019: Philip Becker has a joint role as CEO of Netherlands-based operator Hedera and Chairman of the European Office Supplies Alliance (EOSA).

Over the past 12 months, EOSA has expanded and added four new members, the most recent one on 1 April when Pagro Direkt succeeded TEKAEF as the EOSA member in Austria. Becker says its joint purchasing activities, new business models and product groups are gaining increasing traction with European office products companies. The alliance also now has more than 22 vendors signed up to its preferred supplier programme, with several new partner agreements having been signed this year. The latest company to join is writing instruments manufacturer edding.

Becker’s Dutch company Hedera has had a good year, focusing primarily on expanding its wholesale trade. It has also launched a brand new website incorporating the latest e-commerce technology.

2018: Philip Becker is both Chairman of the European Office Supplies Alliance (EOSA) and CEO at Netherlands-based operator Hedera.

During 2018, the EOSA role has seen Becker successfully implemented the new business strategy first developed last year. A drive for new vendor partners has resulted in numbers increasing to 26 and the group is confident that this count will continue to grow. The alliance is also looking for new members in a number of countries and negotiating with existing members where the ownership situation has changed, namely Switzerland’s iba/Office World and Luxembourg’s Muller & Wegener.

Becker’s company Hedera has had another successful 12 months and its Prios wholesale business has sustained the expansion seen in previous years.

2017: As Chairman of the European Office Supplies Alliance (EOSA), Philip Becker has overseen the development of a new business strategy which was approved by its members at a meeting in Malaga, Spain, this June.

Other EOSA news includes the alliance seeing 95% of its vendors deciding to continue with the EOSA partnership for the 2017/18 period. Additionally, EOSA’s private label range – known as the A-series – now numbers over 2,000 products.

Highlights at Becker’s company, Netherlands-based operator Hedera, this year include the success of its Prios wholesale business which has benefitted from a new website and improved product mix.

2016: 2016 has been about building on the impetus it generated in 2015 at the European Office Supplies Alliance (EOSA).

The organisation – whose members have end-user sales of more than €600 million ($660 million) – has been quietly going about developing its preferred supplier programme, with now around 25 vendors signed up in a wide range of product categories. Manufacturers are given the status of ‘category captains’ in most of the categories and the programme has led to encouraging increases in purchasing volumes.

In terms of membership, EOSA welcomed leading Turkish reseller Akoffice at the start of 2016, taking its total number of members to 11. EOSA Chairman Becker says that attracting a member from France remains a priority for the group.

2015: It’s been a proactive and good 18 months for the European Office Supplies Alliance (EOSA). According to Chairman Philip Becker, most of its members have been seeing double-digit growth in their operations. The organisation has given its own brand range of products a new look and the a-Series now comprises about 1,000 SKUs.

Working closely with the manufacturing community, EOSA last May also announced the signing of ten preferred supplier programme agreements. The alliance’s portfolio of vendors has further increased through the addition of new product groups including clothing, personalised gifts and services. New member recruitment is on the agenda for 2016, says Becker.

At his own company, Netherlands-based dealership Hedera, Becker has started up a new wholesale company called Prios, among other initiatives.