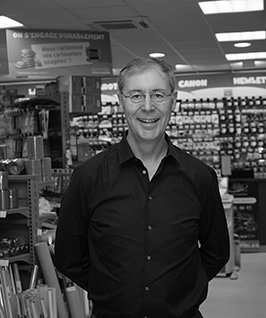 2021: In the 12 months to the end of March 2021, Bureau Vallée’s revenue topped €500 million ($582 million) for the first time. This was driven by its approximately 300 stores in France, which achieved double-digit growth as they stayed open (after being declared an essential business) during the country’s various lockdowns. 19 new stores were opened during the year.

This helped Bureau Vallée attract thousands of new clients who were shopping for WFH items such as printers, consumables and furniture. A delayed back-to-school (BTS) season also benefited Bureau Vallée: many consumers purchased items after students had gone back, and by then mass retailers had already reduced their BTS assortments.

The retailer was also well placed to tap into the rise of e-commerce, having completed work on a new digital platform in February 2020, just a few weeks prior to the first lockdown. Fortunately, a system breach in March 2020 did not dampen sales. For CEO Bruno Peyroles, achieving profitable online sales is still something of a headache. So far, he has refused to introduce free shipping or raise prices to offset the extra costs involved.

Peyroles’ son Adrien was appointed Managing Director of Bureau Vallée France earlier this year. Daughter Christel Jaffres, who ran this side of the business for several years, has started her own venture supporting local farmers and is also running the Bureau Vallée Foundation, which was set up at the end of 2019.

Recent projects include a virtual showroom for seating and workplace furniture, a category Bureau Vallée is looking to develop, especially following the acquisition of Belgian specialist Buro Market at the beginning of 2020.

2019: 2019’s European Office Products Awards in Amsterdam gave Bruno Peyroles and his Bureau Vallée office and school supplies franchise network a double reason to celebrate. Not only did the company win the Reseller of the Year prize (for the second time), but its founder was recognised by his industry peers with the coveted Industry Achievement award.

The France-based retailer has been growing at a double-digit rate for more than a decade and its sales hit the €400 million ($440 million) mark in 2019. Store openings continue to average around 20 per year and the total number of outlets now stands at approximately 330, with just over 290 of those located in mainland France.

Sustainable development is something that is very close to Peyroles’ heart who offered to make the company’s well-established environmental product evaluation tool available to the wider French market following the demise of the SOFEA trade association earlier this year.

Another strategic project Peyroles is spending time on is succession planning, and he is developing an innovative plan to ensure the long-term future of the company he founded in 1990.

2018: Bruno Peyroles’ Bureau Vallée continues to grow at a double-digit pace. In its most recent financial year (to 31 March 2018), sales increased 12% to €375 million ($430 million) and the franchise retail chain ended the period with 305 stores.

More than 20 new stores are projected to open in the current financial year. These include a focus on the smaller ‘City’ format stores – with a number of new outlets in Paris – and on small and mid-size towns in France. The group also continues to expand outside its French borders – in September, Bureau Vallée opened its first store in Italy, in the historic city of Verona, and its Spanish subsidiary recently opened its first outlet in the Canary Islands.

Other projects include further development of the ‘Drive’ click-and-collect concept, continued sponsorship of round-the-world sailor Louis Burton (which included the acquisition of a new Bureau Vallée boat in 2017) and increased investments in digital tools and social media.

2017: Bureau Vallée has achieved another milestone in 2017 with the October opening of the franchise group’s 300th store – a city town centre outlet in Barcelona which is also Bureau Vallée’s 48th store outside mainland France.

While the store opening schedule in France is still on track (10-15 new stores this financial year), international expansion is currently a focus for Bureau Vallée. Following a joint-venture agreement with Tunisian stationery manufacturer Office Plast, the first Bureau Vallée store opened in the country earlier this year and two more are planned for 2018. The group also opened its first store in Cameroon, and other market entries slated for 2018 include Morocco, Madagascar and in northern Italy.

With his daughter Christelle running the day-to-day business at the Bureau Vallée head office just outside Paris, founder and CEO Bruno Peyroles is spending more time on strategic matters such as international expansion, succession planning, company culture and the longer-term structure of the group.

2016: If there is a retail crisis in the office supplies industry, someone forgot to tell Bruno Peyroles of Bureau Vallée. His franchise network is set to increase by another 20+ stores by the end of the current financial year (to the end of March 2-17) to around 285, with end-user sales expected to be in the region of €340-€345 million ($383-$388 million).

What is more, the sales growth is not just down to new stores – established outlets are seeing strong organic increases and Bureau Vallée once again took market share during the important back-to-school season in France in 2016.

Peyroles is spending more time these days in an international development and strategic direction function after his daughter Christel took on the day-to-day responsibilities of Bureau Vallée. As such, further expansion outside France is very much on the cards.

Countries such as Belgium and Spain are growing steadily and there could be openings in other European markets in the coming months. In Africa, Bureau Vallée is set to open in Cameroon and Morocco, while France’s overseas departments continue to develop at a good pace.

Other projects include expanding the BV Drive click-and-collect concept and the piloting of a drop-shipment service for customers.

2015: This year marks the 25th anniversary of France-based franchise chain Bureau Vallée, and founder and CEO Bruno Peyroles will be joined by staff, franchisees, vendors and other key partners at the end of November to celebrate the occasion.

The discount retailer continues to expand, both in France and overseas, at the rate of about 25 new stores per year, with the total now at around 270. 2015 has seen an outlet opened on the Mediterranean island of Malta, and further development in Spain and Belgium. Peyroles says he is looking at options for entry into other European markets.

In response to the growing co-working/teleworking trend, Bureau Vallée has introduced a new store concept called Beev’up for city centres, while the company is also introducing a suite of services aimed at small business customers.

E-commerce is a major area of development and 2015 was a record back-to-school year for Bureau Vallée, thanks in no small part to a new click-and-collect school supplies initiative.