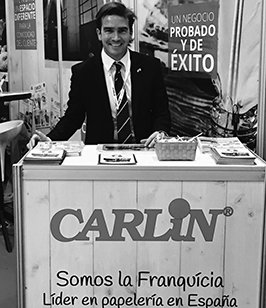 2019: José Hernández Sanchez is Director General at Carlin, the Spanish multichannel operator that covers the whole of the Iberian region. He is the son of co-founder José Luis Hernández Salvador, who remains President of the company.

With its multi-pronged business model, Carlin is one of Spain’s leading OP players, competing head to head with the big boxes, but also best known for its franchise chain of over 500 small papelerias spread throughout Spain and Portugal.

At the recent 2019 FrankiNorte Franchise and Business Exhibition, the company scooped a special industry award in recognition of its 30 years of service as a franchising business

2018: José Hernández Sanchez is the son of Carlin co-founder José Luis Hernández Salvador and has been working at the Iberian franchise chain for nine years.

While his father is still President of the company, Hernández Sanchez is now running all day-to-day operations of what has become a substantial multichannel operator in Spain.

That said, the company remains best known for its franchise chain of small papelerias, now standing at 526. Carlin this year celebrates its 20th anniversary in the Portuguese market.