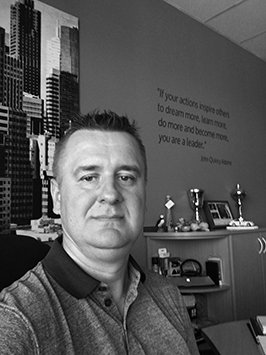 2021: After the huge impact the lockdowns in April and May 2020 had on the Hungarian business sector, Corwell CEO László Fehér says trading for the rest of the year was better than expected. For the 12 months as a whole, revenue was between 3-5% higher than in 2019. This was particularly impressive as the wholesaler itself was hit by COVID infections among its staff, and Fehér admits it was tough from a human perspective.

The CEOs views the pandemic as a period when the value of Corwell’s pure wholesaling model was truly appreciated by its customers. The company offered support to dealers with financing and payment terms as the industry stuck together to get through the crisis.

One interesting project Corwell has been developing is a B2C e-commerce solution – called Shopwell – for its dealers. It is a platform developed by Corwell that resellers can then customise to suit their needs. It was upgraded to version 4.0 in April 2020 – which was good timing – and made available a few months later. Currently, more than 270 Hungarian dealers are using the web shop and the plan is to introduce it into Corwell’s other markets, most likely starting with Slovakia.

Other initiatives in the pipeline include the modernisation of Corwell’s distribution capabilities, particularly from a technology standpoint, but this is not likely to be implemented before 2023.

2019: László Fehér, Managing Director and co-owner at Hungary-based OP wholesaler Corwell, says that company has continued to expand its market share and achieved overall growth of 9.3% in 2018, compared to the previous year.

He anticipates that a strong financial performance coupled with strict cost controls could see record-breaking profit levels in 2019. The plan, he says, is to achieve further growth of 4.7% over the rest of this year, with the bulk of this coming from the FM and traditional OP categories. Results to date are on track and Corwell is confident it will hit its targets come year end.

2018: Lazlo Fehér is Managing Director and co-owner at Hungary-based OP wholesaler Corwell, a position he has held since 2009.

From its inception in 1991, the company has been focused on paper, office products, IT accessories, consumables and school supplies. Now the leading wholesaler in the Hungarian market, Corwell has also been expanding into other European countries, most recently the Czech Republic.

2018 has been a year of consolidation for the business, with Fehér referring to the company’s intention of strengthening its position in central and Eastern Europe where it wants to become an increasingly significant player.

2017: Fehér has headed Hungary-based OP wholesaler Corwell as Managing Director and co-owner since 2009.

Corwell was established in 1991 and celebrated its 25th anniversary last year.

Starting out as a small two-man operation selling tape and floppy discs at trade fairs, it has since become the market leader in Hungary for wholesale office supplies. In recent years, it has expanded into the Czech Republic, Slovakia and Croatia, growing a customer base for its own-brand Victoria and MaYAH labels, as well as its Victoria Green range of environmentally friendly jan/san products.

It operates out of a 7,000 sq m central warehouse in Dunakeszi, Hungary with local hubs serving its other operating regions.

As it is privately-owned, the company rarely releases financial updates, but Fehér disclosed that the FY performance was “a little bit beyond on our expectations” and that it was a “great year” for Corwell.

The group boasts a busy pipeline for the coming year as it continues to develop its logistics capabilities, aiming to re-launch the segment in early 2018. Meanwhile, its ERP and e-commerce platforms are both expected to go live in 2019.

2016: 2016 has been a special year for László Fehér and his team at Corwell as the Hungary-based wholesaler celebrated its 25th anniversary. The occasion was celebrated during the company’s annual expo at its headquarters just outside Budapest which attracted more than 1,000 visitors, with many travelling from neighbouring countries such as Slovakia and the Czech Republic.

On the business front, Corwell continues to make progress with its long-term logistics development plan and a 2017-2018 ERP plan for its operations in Hungary, Slovakia, the Czech Republic and Croatia.

2015: Corwell is a good example of how tough business is in the OP space. The wholesaler continues to face difficult market conditions in its home country of Hungary, but remains profitable.

As an extra bonus this year, Corwell was awarded the Business Superbrands prize, recognising continuous developments within the company as well as outstanding brand-building. As far as its other markets of Slovakia and the Czech Republic are concerned, Managing Director László Fehér describes Corwell’s performance there as “encouraging” and “challenging”, respectively.

One of the biggest challenges, says Fehér, is in the area of logistics. Despite huge investments over the past two years, there’s still scope for further improvements and additional investments are needed to facilitate these.