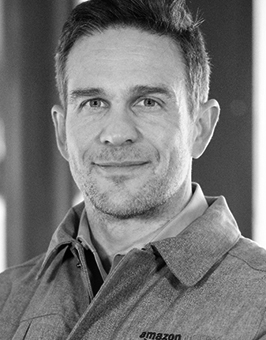 Alexandre Gagnon was made VP of Amazon Business in July 2019, overseeing the online giant’s B2B operations with global sales of more than $25 billion.

For more news on Amazon Business, read the following:

ABX 2020: the attraction of Amazon Business

2021: If we can talk about winners and losers during the COVID-19 pandemic, then Amazon Business must surely be one of the former. As customers shifted their purchasing online, Amazon Business became a go-to destination and played a key role in the supply of PPE products to the public sector in the countries where it operates. It even waived seller fees for COVID-related supplies in the early days of the crisis.

Running in nine countries, Amazon Business’s worldwide sales now exceed $25 billion, and is even predicted to hit $80 billion by 2025. Customers include 80 of the Fortune 100 companies in the US, 25 of the DAX 30 in Germany, and more than 50% of those listed on the UK’s FTSE 100.

More than half of Amazon Business’ revenue is derived from third-party Marketplace sellers – and there is a strong message that purchasers can source from local businesses through the Amazon platform. The company revealed that, in the UK, sales generated by local SMBs have been growing by more than 50% each year since Amazon Business was launched in 2017, equating to more than £300 million ($420 million) in revenue for these businesses in 2020.

In 2021, Gagnon hosted the first-ever Reshape virtual conference for procurement leaders, highlighting areas such as the use of AI in the quest to make purchasing more efficient. The event will return in March 2022, but this time will be spread over two days – one focused on North America and the other on Europe.

2019: Another new entry to this year’s Top 100, Alexandre Gagnon has taken over from Prentis Wilson as VP for Amazon Business. Gagnon has big boots to fill – Wilson took charge of Amazon’s B2B business in 2015 when it was transformed from the AmazonSupply platform into Amazon Business and created a $10 billion+ giant. To put that figure into perspective, a year after the relaunch, the platform had sales of $1 billion. If the current trajectory maintains its momentum, don’t be surprised if the next time Amazon reveals sales figures for the division, they easily top $15-$20 billion.

A natural choice to replace Wilson, Gagnon is no stranger to Amazon, having spent the past 15 years there in several roles. He started in the business in 2004 as a Music Buying Manager, working his way through the ranks, including supporting the launch of Amazon in Italy and Spain in 2010 and 2011, respectively.

As Technical Advisor, International Consumer, he relocated from France to Amazon’s headquarters in Seattle, Washington, in 2011. Just two years later, he was made Managing Director of Amazon Canada and Amazon Mexico and VP of the division another three years after that.

His international experience will stand him in good stead, as Amazon Business already serves more than half of the companies registered on the Fortune 100 in the US, the FTSE 100 in the UK and the Dax in Germany. Last year, it launched in several countries – Italy, Spain and France – taking the total to eight (Japan and India as well, in addition to the aforementioned ones).

Over the past year, the firm has divulged a number of plans to boost business customer numbers which, Amazon claims, are already in the millions worldwide. Not all strategies are currently available outside the US, but they include: spending $800 million to provide a free one-day shipping service for its Prime members; Guided Buying for small businesses wanting to connect with government buyers and improve compliance; free access to website tools from web hosting firm GoDaddy; and Amazon Day for Business whereby Prime members can choose a recurring day of the week to receive their deliveries.