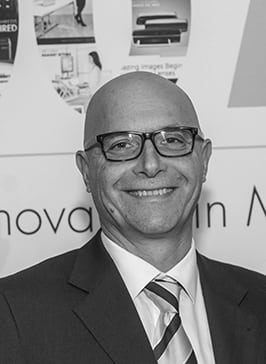 2019: Under the leadership of Managing Director Adriano Alessio, Italian dealer group In Ufficio has seen its membership increase to 25 over the past year, with the addition of two new dealers: Grafus, based in Bolzano and Barbero, situated in Torino. This has helped grow end-user group sales to €155 million ($173 million).

Sales from traditional OP products are in decline, but sectors such as PPE, furniture, jan/san, FM and gift & promotional items are growing for its dealer members, says Alessio.

This year, the group’s e-commerce platform has been radically redesigned and its In Linea product range now comprises over 500 SKUs. An updated online catalogue has been introduced offering 9000 SKUs, with training in new product areas such as ergonomic products, PPE and packaging being made available to members. The group currently has 105 ‘preferred supplier’ agreements.

2018: Under the leadership of Managing Director Adriano Alessio, Italian dealer group In Ufficio has seen its membership increase to 24 over the past year, with the addition of three new large players. This has meant group sales increasing to €135 million ($157 million), which is approximately 5% of the total domestic B2B market. Individual members have benefitted from their end-user sales growing at around 5% in 2018.

The group’s In Linea product range now comprises over 450 SKUs, held mainly at the Office Distribution warehouse near Milan. An updated online catalogue has been introduced throughout this year, with training in new product areas such as facilities management being made available to members. The group currently has over 100 ‘preferred supplier’ agreements.

2017: 24-member In Ufficio is Italy’s last remaining dealer group dedicated to the B2B market. Total end-user sales in 2016 were up to €130 million ($154 million) and for the first nine months of 2017 growth has been in the region of 2% – a resilient performance given that the overall market for office products in Italy has been flat.

Managing Director Adriano Alessio has been encouraging his members to expand their product and service offerings, and to make more use of technology in their day-to-day operations. The 2017 In Ufficio catalogue weeded out around 500 SKUs and added a similar number of products in new and growing categories. A new private label coffee brand has been introduced and the plan is to launch a managed print services offering in 2018.

Alessio continues to be a figurehead for the Italian office products industry: in 2017 he was re-elected for another term as President of the country’s OP trade association, AIFU.

2016 NEW ENTRY: We welcome Gruppo In Ufficio’s Managing Director Adriano Alessio back into the OPI Top 100 in 2016. Alessio is a key figure in the Italian office supplies industry, not only running the In Ufficio dealer group, but also continuing to lead the country’s AIFU trade association.

The overall office supplies market has been flat in 2016, according to the latest AIFU numbers, as the country’s GDP growth remains soft at under 1%. Categories such as print consumables are experiencing significant declines, underlining the importance for resellers to expand into adjacent categories.

This is what Alessio has been doing at In Ufficio, developing product ranges in categories such as jan/san and safety. It’s a strategy that is paying off: end-user sales at the group – which has 22 members with combined sales of around €115 million ($125 million) – increased by almost 5% in the first half of 2016.